Now completely protected, and brimming with fresh supplies of wood, ore, and booze, my fortress is doing better than ever. And then I notice that my dwarves, having not seen the sun for too long, have been puking their guts out all the way to and from the trade depot. They’ve been walking on a path of puke. That’s really gross.

Rather than bemoan this, I embrace it! I order the path and part of the outside courtyard to be paved over with olivine – a stone well known for its rich, puke-green color.

But it raises a dilemma. I don’t want my dwarves to become cave-adapted… but I don’t want them going outside all the time either, even within the walls. They’d get in the way of more important operations, like farming.

I come up with a solution. I’ll dig a giant hole in the earth, leading 3 Z-levels down, to the dining level. At the bottom will be a new statue garden. Dwarves love their statue gardens and will surely want to hang out there, even though the nauseating sun will shine down upon them. 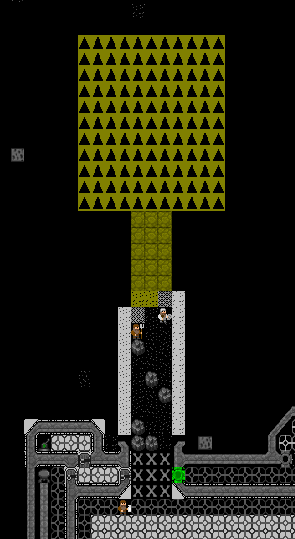 Look at those pathetic miners. Look at how little stone they leave behind, how slowly they work! Oh 1 and 2, how I miss you.

Unfortunately, the top of the hole must emerge OUTSIDE the protective walls of my fortress. I suppose I’m going to have to risk it.

With half the digging complete, I need to get miners and masons outside so that they can mine downward and construct a wall around the hole. It’s too risky to use the trader’s airlock, so I build a much smaller airlock consisting of 4 doors. Two doors can be locked manually, and the other two are locked by levers. I think it’s a pretty clever design.

Once again beset upon by goblins, I discover I am wrong.

I should mention at this point that I do now in fact have a military. But they are strictly marksdwarves. None of that risky injury-inducing melee combat! Here’s a shot of them training. This is just inside the fortress.

I once tried building fortified towers for them to shoot from, stationed atop my fortress walls, but that didn’t seem to work. So I have them stationed on the ground, instead.

Amazingly, despite harrasment from the goblins AND kobolds, I manage to get the entire hole dug, and walls built around it for extra protection. I’m pleased.

But all of a sudden, the announcements feed is spammed with these:

What? Someone was injured? Who? I hope it’s nobody important… 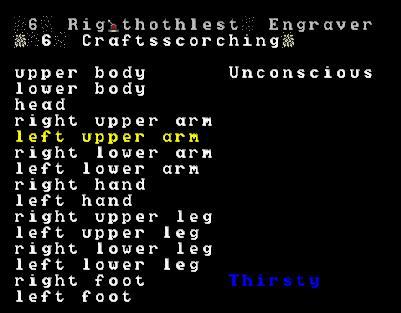 Shit. Another of the numbered dwarves.

‘6’ Rigòthothlest is a VERY important dwarf… just look at all the stuff she’s good at! 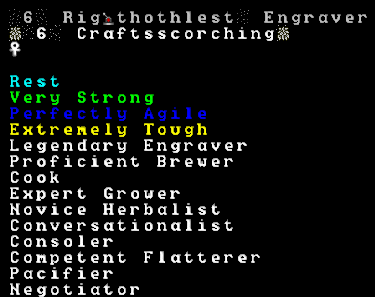 While normally a broken arm isn’t such a big deal, she’ll die for sure unless I find a way to get water.

Those dwarves will lose their cave adaption in no time!

6 begins to die a slow and painful death. I try everything. Maybe beer will be good enough? Wait, I have milk! Will milk work? I stockpile both of them next to her bed. Nothing. Maybe I can I build a well somewhere? No, wells don’t just magically produce water…

I have no options. As 6’s condition worsens, I decide that the most humane (dwarfane?) thing would be to allow her to die a quick death. I begin construction on a magma pipeline, to fill her room and end her misery.

She dies of thirst before its completion.

I have her body laid to rest in a silver sarcophagus in her room. And then I flood the room with magma anyway. It seems like a dwarfy way to be buried. 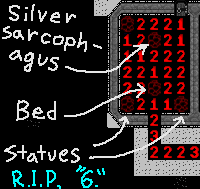 If this story inspired you,
Learn to Play
with Peter Tyson's new book.